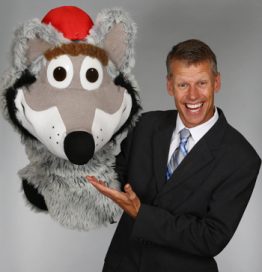 Our guest speaker today is Dan Meers. Dan goes to work each day like many other men, dressed in a suit. The only difference is that instead of wearing a tie with his suit, Dan wears a tail. You see, Dan has an unusual occupation; he is a professional mascot. For the past 30 years Dan has served as KC Wolf the mascot for the Kansas City Chiefs football team. Dan averages more than 350 appearances each year and he has traveled throughout the United States and around the world entertaining fans of all ages. In 2006 Dan became the 1st NFL mascot inducted into the Mascot Hall of Fame. When he began his career with the Chiefs back in 1990 Dan never dreamed that he would still be wearing a costume 3 decades later, but as Dan’s wife likes to say……”Old mascots never die, they just smell like it”.